Trieste romantic? When I think of romantic places, Trieste in Italy is not usually on my mind. I saw a few commercials for romantic stays there and I was a bit sceptic. Actually, for me it was allways more a place to go shopping to, or to catch a plane from the Trieste airport. Sadly, living in Ljubljana, Slovenia, doesn’t give you much low budget airline options, so we travel addict soon learn where the closest plane hubs are. 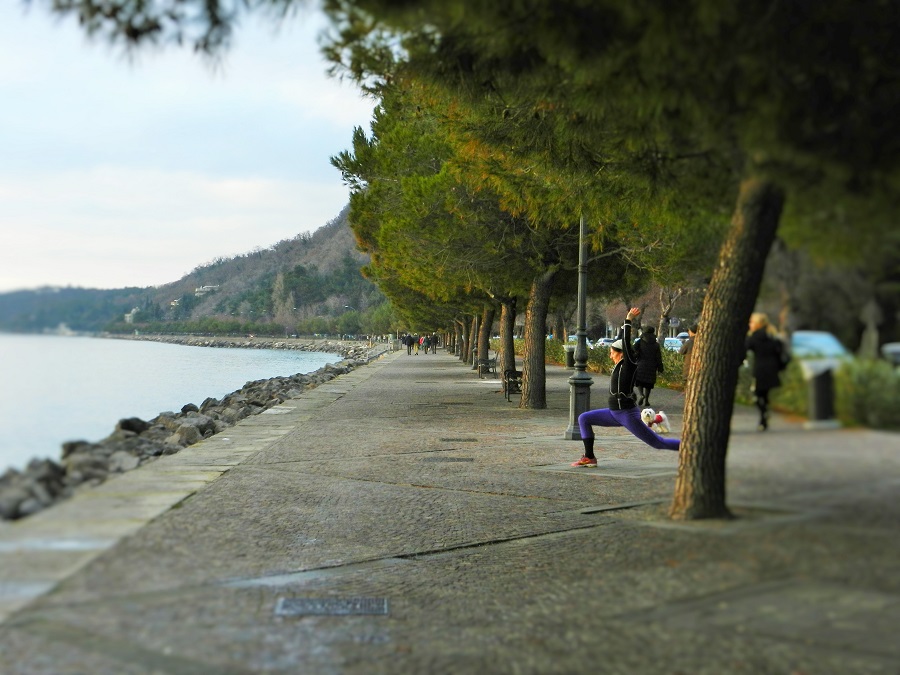 When we were returning from the castle, locals started to come out to get some fresh air.

One sunny Sunday we decided to go for a romantic walk at the beach and see the local castle Miramare. I also planned to use the famous Trieste tram that goes from Piazza Oberdan to village Opicina (Opčina). It is supposed to be a mix between tram and funicular with spectacular views on the Adriatic sea. There was also an option with going off a few stops early and doing some hiking to the top, but we will have to do that next time, when days are a bit longer. There is not much point in having to imagine the view after dark. 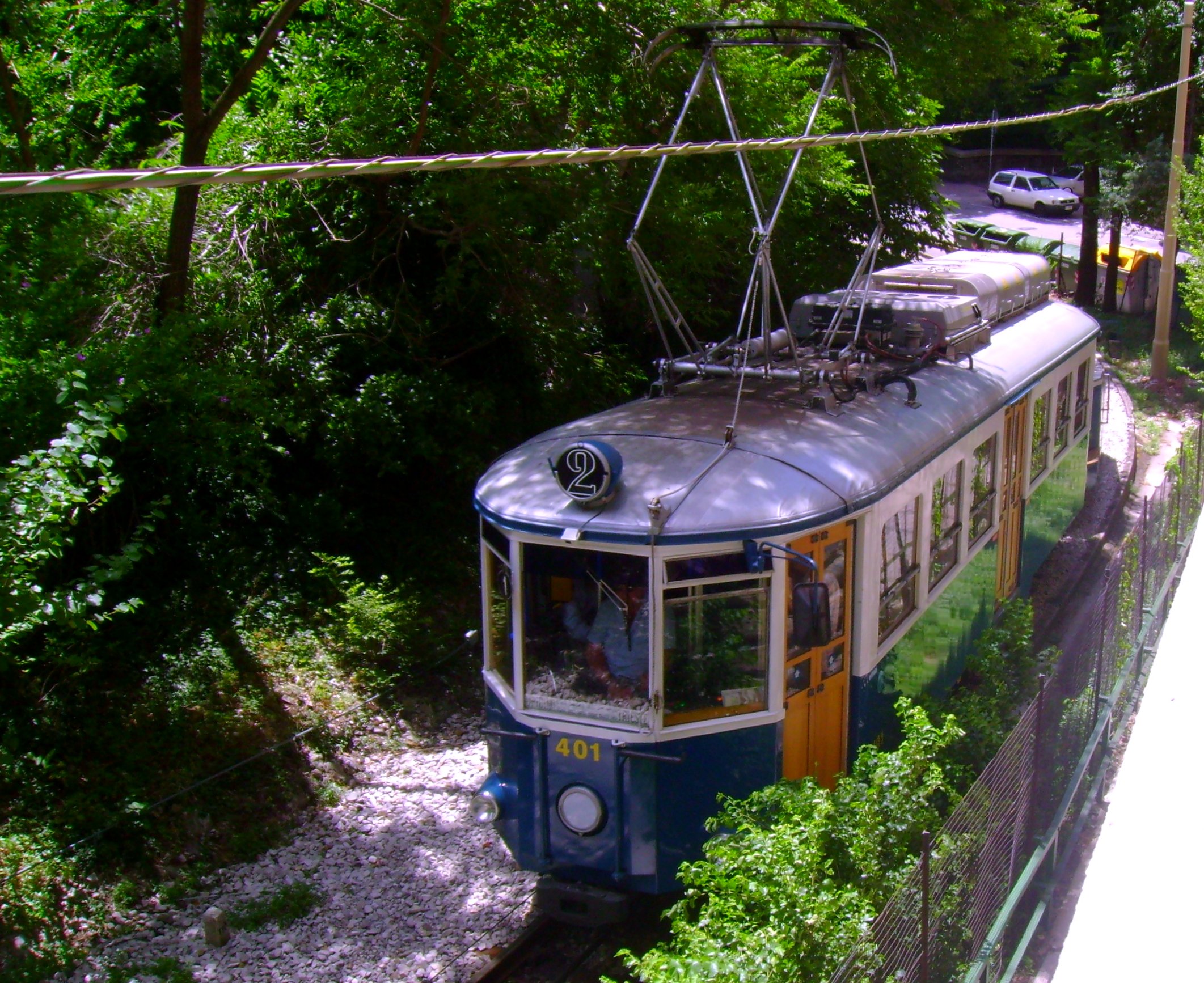 Castle and the Miramare park 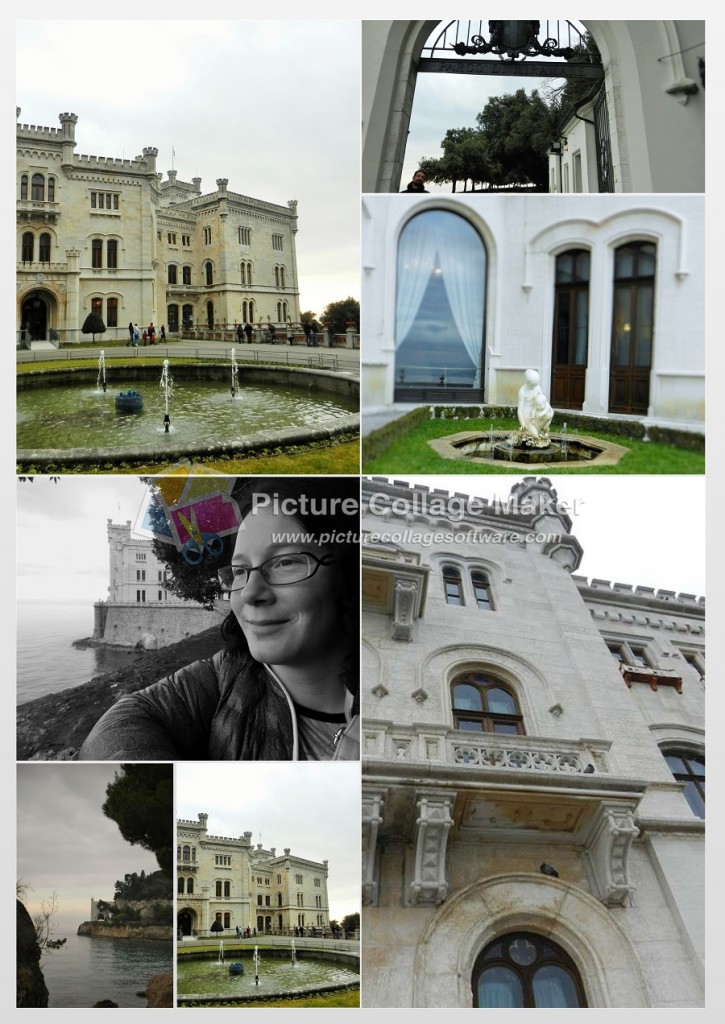 Fooling around the Miramare castle.

We parked near the centre of the city and decided to walk to the castle we could see in the distance. It was a bit further away than we expected it to be. But we were walking on the road next to the sea and there were plenty of drinking water fountains to refill our bottles and enough of nice benches. Those were perfectly positioned for staring at the sea, counting the seagulls and boats and having romantic conversations.

The next surprise came at the castle. The park surrounding it is enormous. I was expecting nice little garden with a few rows of flowers and a bench or two. In reality Miramare castle is located in the 22 hectares (54 acres) large park. While in 1856, the park area was bare, with only some shrubs and thorny bushes today you can enjoy a walk between exotic trees and have a coffee in a cottage by the lake where castle gardeners used to live. During and after the Second World War castle was home to different armies but since 1955 gardens are open to public.

It is possible to also visit interior of the castle, but we skipped that part. It looks very impressive from the outside. They have a bit of a pigeon problem. While the front of the castle is nice and clean, parts in the back looked like a pigeon toilet. But we still managed to find a few cleaner spots for posing and admiring the view. Name Miramare comes from Spanish language and means view on the sea.
While gardens were impressive enough in the winter, we will surely come back in spring, when everything will be in full bloom. There is also a smaller castelletto, with a local sea life and fish exhibition inside it. 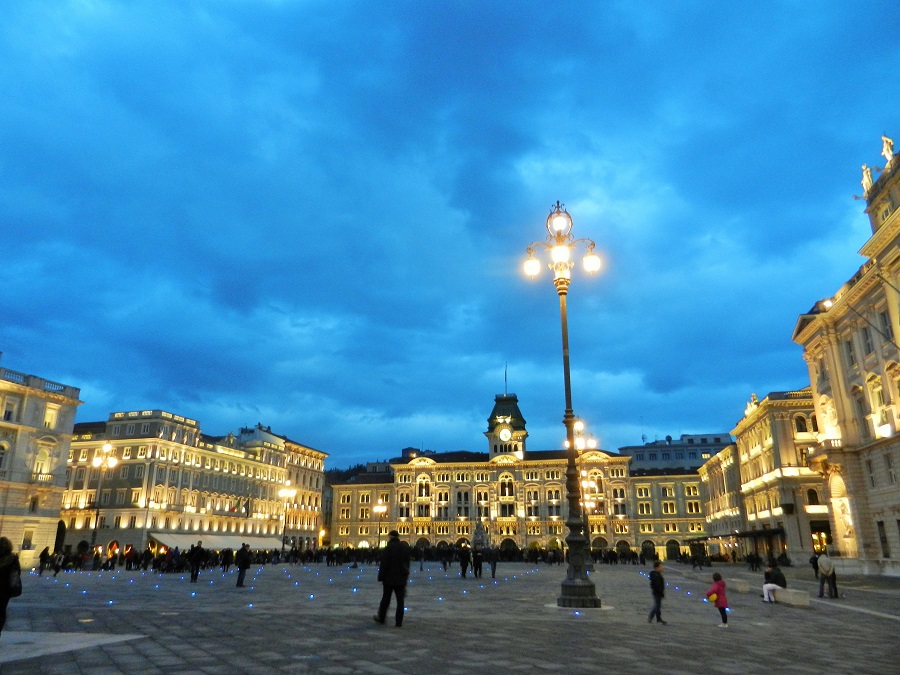 After long walk back to the car, we decided to go get something to eat in the centre, and to check out the famous Piazza dell’Unita d’Italia, the biggest town square with view at the sea in Europe. We soon realized we will not be able to drive there. There were police cars everywhere and centre was closed for traffic for a few hours. There were signs in Italian language. We had no idea what they said and we decided to check out what was going on. There were groups of very loud locals protesting against something and of course they were all gathering on the main square. We did our best to figure out what they were unhappy about but decided that we are too hungry to think and should find an open Patisserie (italian bakery). 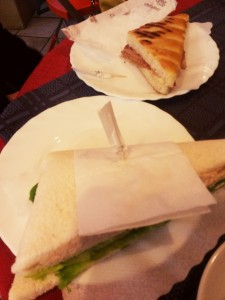 Since it was Sunday and a bit early for an Italian dinner time, most of the bars were closed. Near the Piazza dell’Unita we found an open one and tried some local cuisine. There were all types of baked goods available, but we were hungry enough for a sandwich. We took one tramezinno with tuna and one panini with prosciutto. The difference is that tramezinno is not toasted. They were both delicious. Cappuccino was creamy and perfect, and we didn’t worry about the fact it is considered a breakfast drink in Italy and everyone else in the bar was drinking expressos.

Since goblins love to travel, but usually do it on budget, we use Airbnb. By using this link to subscribe, you get 20 euro of your first trip, and we get a little discount on our next. If you are not into Airbnb, there is a Booking.com link on the right side of our page. If you are looking for a travel gear, wisit our Goblin shop. Travel as much as you can.